I've been a very bad sponsor again for not posting an update on Sunday. I had to work most of the weekend, which left me little time for other household duties.

And I won't have an update this coming Sunday either. I'll be in Las Vegas!! My little sister is turning 30, so the family is headed to Sin City! So while I won't be writing or updating, I will of course be reading, thanks to a 6 hour flight each way. Here's what I've loaded onto Kindle in preparation for the trip:

Promise and Purpose by Kristie Cook

If you have any other recommendations, let me know! I can always upload a few more for the trip :)

Thursday - Did get some writing done on Heir. Not as much as I wanted, but enough to get through a sticky scene.

Friday - Worked a bit on my other WIP. Glad I decided to continue working on it!

Saturday - Had to work all day, then napped. 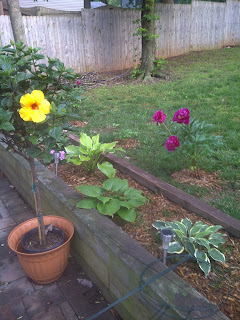 Monday - Thankfully, my goal is to just write everyday with no word counts. I did some editing and managed to write a bit more scenes for Heir.

Tuesday - Packed for my trip to Vegas.

All in all, a poor ROW80 showing this past week. Maybe I'll have better luck in Vegas!
Posted by Claudia Lefeve at 4:12 PM 6 comments
Email ThisBlogThis!Share to TwitterShare to FacebookShare to Pinterest

Today I'm finally getting down to business. My WIP has been swirling around in my head for days and it's driving me crazy! I told the hubby it was time for me to go back to my office (which has been serving as my laundry station as of late) and not to bother me until Modern Family. While I have been writing, I feel as though I've been slacking too (no surprises there).

Sunday - Didn't get any writing done. I got some kind of bug and I napped the entire day.

Monday - Stayed home, as I was still feeling sick, and got no writing done. But I did manage to read the new Sookie Stackhouse novel. Thought it was much better than the last one. Oh, and I lowered the price of The Fury to 0.99 on Amazon and B&N, now that the donation period is over. Thanks to everyone who purchased a copy to benefit Pandora's Project!

Tuesday - Got a bit of writing done on one of my other WIP's. An idea struck and I just went with it.

Today - Currently sitting in my office, Season 2 of Buffy DVD boxset ready to go, and once this post is done, I'm going to get down to business!
Posted by Claudia Lefeve at 6:48 PM 6 comments
Email ThisBlogThis!Share to TwitterShare to FacebookShare to Pinterest

What I Did and Didn't Do

For some reason, I haven't been able to get my days straight this week. I thought my hair appointment was for Tues (it was Wed), I thought the gutter folks were coming on Tues (it's actually today), and I thought I had to turn in final grades today (nope, it was yesterday)!

So last night, I spent five hours grading final exams, averaging and entering grades before the midnight deadline. I was so jubilant on Monday when I gave the last final, I totally forgot about having to grade them! The upshot is, I don't have to work late Monday nights and I can sleep in Saturday mornings until next semester. Oh yea, and I have more time to write!

That being said, I got absolutely NO writing done since Sunday. I did manage to finalize the last chapters and did a backwards outline (which I swear works). So I did get something done.

Of course I can't blame my schedule for my lack of focus this week. As usual, a few books got in the way. This is what I've really been up to the last few days...

I picked up both of Kate Copeseeley's books. Compis reminded me a little of The Giver and Six Keys was a great mystery mixed with local folklore and witchery. Must read more...

Right now, I'm in the process of begging Kate to let me beta read her next books.
I also discovered a new indie author, Sarra Cannon. Sure enough, when I like an author, I have to read everything they've put out all at once. So I spent Monday and Tuesday reading the Peachville High Demons series. The fourth book, Shadow Demons, will be out later this month (I think/hope!).

Posted by Claudia Lefeve at 10:39 AM 5 comments
Email ThisBlogThis!Share to TwitterShare to FacebookShare to Pinterest

Not One, but Two...and an Interview

It's been a great week so far and it's only Tuesday! First off, two great reviews for The Fury.

What Heather at Bewitched Bookworms had to say: "The Fury is an enjoyable read, full of emotion and accurate details of what a small town can be like."

What Stacey at See Spot Read had to say: "If I had to give a description I'd say "think Friday Night Lights meets the Twilight Zone"."

Not only that, but I did my first online interview over at What Passes for Sane on a Crazy Day.

What a great way to end the last week of sales benefiting Pandora's Project.
Posted by Claudia Lefeve at 11:16 AM 4 comments
Email ThisBlogThis!Share to TwitterShare to FacebookShare to Pinterest

I'm not a mom, but here's a little essay for all those childless folks like myself, but have a different kind of 'child'.
Children. It was the one thing my husband and I had decided early on and one thing we would never waiver on. “We don’t plan on having any,” is the canned response to most inquires regarding kids. We reserve the right to change our minds and accidents do, on occasion happen, but the idea of being parents still daunt us.
Even now, just a few months shy of thirty-five, I have no desire to become a mother. Perhaps I was overlooked the day they passed out maternal instincts. But when I look at my two adopted children, my heart softens and I truly believe that my husband and I were blessed with the best kids a parent could ever have.
You see, my husband and I are owned by two pugs.
I’ll be the first to admit, raising two little guys isn’t the same as being the parent of a child. In some ways, it’s harder. When they're sick, they can’t tell you where it hurts. Unlike children, they are not welcome wherever you go. Most restaurants don’t allow dogs - even those with patio seating. And it’s almost impossible to find a good babysitter.
But in many ways, they’re very much like children. Our pugs appear on our Christmas cards, they go on vacation with us, and when they visit grandma, they get presents. But most of all, they are loved.
As pug parents, we’ve even developed clairvoyant parent-like reflexes. Like when we both wake from a deep sleep just as little Guapo is about to puke his dinner from the night before. Not unlike a mother who briefly loses her child at Wal-Mart, I know the exact moment when my pug escapes from the backyard fence. And almost daily, the house is filled with the sound of my voice, “Stop whatever it is your doing. I can see you from the back of my head!”
Like any good parent, you also make sacrifices for your little ones. We often turn down parties and events to stay home with our kids. We’re limited on where we travel, so we bought an air-conditioned pop-up trailer to stay at campsites, in lieu of hotels, so they can travel with us. Our pugs have spent summers touring Civil War battlegrounds, Spring Break at the beach, and on one occasion, they were even invited guests at our friend's wedding – that just happened to be at a petting zoo.
I worry about things like college too. In my daydreams, Gus is destined for Harvard (yes, he is smarter than most humans) and Guapo will probably end up at some vocational school. But then reality sinks in and I remember they aren’t human. Then I smile at the realization that I don’t need to pay for things like college tuition.
“I am the luckiest mother in the world.”
Happy Mother's Day!! I hope all you moms out there had a great day. You deserve it!!!
ROW80 Update:
I've kept my goals pretty simple: write everyday. You'd think a goal that didn't include word counts would be easy, but it's not. For the most part, I've kept up with my goals since last check-in, but I slacked yesterday...and today. But, I still have another hour or two of writing time before I say "good-night."
Posted by Claudia Lefeve at 10:20 PM 10 comments
Email ThisBlogThis!Share to TwitterShare to FacebookShare to Pinterest

It's already May, but I feel as though it might as well be June. Every weekend is accounted for and that's going to put a serious damper on my writing time. Not to mention the fact that we can't start camping until June, due to all the parties/events we are obligated to attend this month. The only good part about May is that I get the summer off from teaching, so I'll have my Monday nights and Saturday mornings back..until last August.

ROW80 UpdateNow that I figured out my conflict glitch, I am now writing away and finishing off the last few chapters of Heir. Fortunately, my goal is to write everyday (no word count), so I've been pretty successful on that front.


PS: Today, on the celebration of the Mexican victory over the French at the Battle of Puebla, I find it ironic that I'm a TexMexican with a French last name.
Posted by Claudia Lefeve at 12:27 PM 7 comments
Email ThisBlogThis!Share to TwitterShare to FacebookShare to Pinterest

It's Not Too Late to Donate!

This is a friendly reminder that there are only 12 days left to purchase The Fury, which benefits Pandora's Project. Even though Sexual Assault Awareness Month is behind us, I'm offering Pandora's Project the benefit of an entire month of sales!

While I realize that $1.99 might be a bit steep (going by other indie books) for a short 10,000 novella, please remember that after Amazon and Barnes & Noble get their cut, less than a $1 for each sale goes towards this fabulous organization that supports and assists survivors of sexual violence.

And yes folks, there will be a price reduction after the donation period ends, but I'd prefer you spend that extra buck between now and May 15th, to support a great cause :)

The Fury is available on Kindle and Nook.
Posted by Claudia Lefeve at 11:48 AM 3 comments
Email ThisBlogThis!Share to TwitterShare to FacebookShare to Pinterest

I have been a bad ROW80 sponsor this past week. I haven't done a bit of writing. Of course, this is not to say I haven't thought about my story...I finally figured out my conflict, so I'm please to say I'm back on the saddle again this week.

On the reading end of the spectrum, I had the pleasure of reading Shari Emerson's (fellow ROW80 writer) WIP and it was great! I am anxiously waiting for her to finish it! I also read Water for Elephants in preparation to see the movie. I enjoyed the book so much, I decided to skip the movie.

That's all I got folks.
Posted by Claudia Lefeve at 9:31 AM 9 comments
Email ThisBlogThis!Share to TwitterShare to FacebookShare to Pinterest
Newer Posts Older Posts Home
Subscribe to: Posts (Atom)