I have been waiting so long for Coffin Hop 2013 that I almost forgot to do a post about it! Coffin Hop is an annual horror web tour event hosted by indie horror writers, including yours truly. There's books, prizes, and all sorts of crazy going around from October 24-31st!

There's still five days left of this spooktacular fanfare! All you have to do is stop by the Official Coffin Hop site and check out all of the horrorific indie authors for a chance to win some great swag!

For those who decide they just can't live without a signed print copy of my newest book, Darkly Beings (New Adult/Paranormal) along with some bookmarks and perhaps a surprise or two. Just leave a comment in the section below (with your email so I can contact the winner) and a name will be chosen at random (contest limited to US only)! 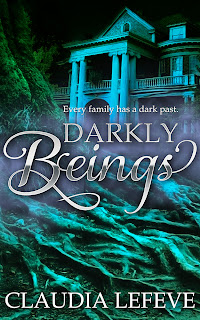 And because I love Halloween and the days leading up to it (yeah, I'm biased...my birthday was yesterday), the winner will also receive a free ebook copy of Coffin Hop: Death by Drive-In! My short story, Kiki and The Lone Stranger, is a companion story to DARKLY BEINGS, so this anthology is a must have for your collection. Even if you don't win, you might want to get one of your very own...not only does it contain some of the best horror shorts, but all proceeds go to charity! 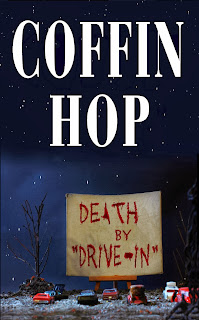 Good luck and remember... Trick Or Treat!!
Posted by Claudia Lefeve at 10:58 AM 8 comments
Email ThisBlogThis!Share to TwitterShare to FacebookShare to Pinterest

The Fate of PARAMETER

This post has been a long time in the making. It's one that I had hoped I could avoid, but due to creative circumstances beyond my control, I guess it's time to address a few things regarding the Travelers Series.

First things first, there WILL be a fourth book (PARAMETER). I don't want to start this post with y'all thinking I'm going to announce the end of the series. But there is bad news: I don't know when it will be out. I can't believe it's been a year this week since I released PARADIGM! And I'm sorry it has taken this long for me to address the continuation of the series.

I've been going through a MAJOR block regarding book four (as the series will continue in the dystopian society that Thornberry has created). It will be much different than the first three books and I want to give it the justice it deserves. I don't want to write something just to release it. It's not fair to you, my awesome readers, (or Etta). I have a few things written down and I am constantly racking my brian for the right story...I'll get there, I promise.

Thank you all who have emailed me, FB messaged me, and posted about it's release. It means so much to me that you want to continue reading the series!

In the meantime, my writer's block (for book four) has lead me to write DARKLY BEINGS, a new-adult paranormal, as well as the new book I am currently working on that will be a mystery (I am finally using my background in law enforcement to good use), but don't let that dismay you! As soon as those voices (Etta, Cooper, Jenny, Moose...) come back, you can bet I will be writing it all down!

Once again, I can't thank y'all enough for your support!


Posted by Claudia Lefeve at 11:52 AM 0 comments
Email ThisBlogThis!Share to TwitterShare to FacebookShare to Pinterest

Seriously...where has October gone? But that means Halloween is just around the corner! I thought I'd do a short post on some of my new favorite Halloween-worthy shows.

First up, Sleepy Hollow (FOX). At first, I wasn't sold on the premise, but I'm glad I was able to catch the pilot episode (free on iTunes) before I decided to invest time in this show. This show (unlike that movie by the same name more than a decade ago), would make even Washington Irving proud. It's got it all: magic, mystery, a hot male lead, and of course for you crime drama buffs, good ol' fashioned police work. 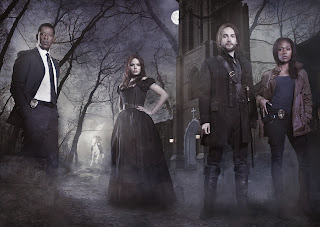 And of course, unless you've been hibernating for the last couple of years, American Horror Story (FX) is back! The series just wouldn't be complete without focusing on witches for this season's storyline in AHS: Coven. A few episodes in and I'm hooked! I can't wait until tomorrow (Wed) night! Jessica Lange has brought her A game once again, as well as newcomers to the series, Kathy Bates and Angelica Bassett. 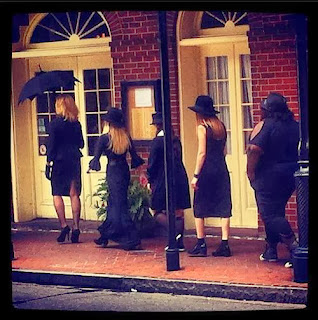 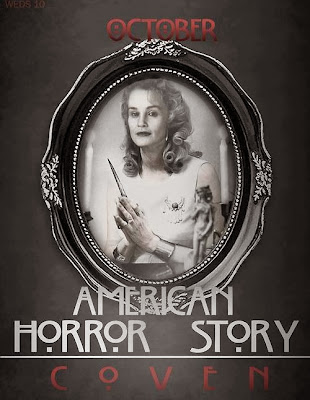 Now, I had no intentions of watching The Witches of East End (Lifetime) as the trailers made it look so campy, but after one late night when I couldn't sleep, my curiosity got the better of me, so I decided to watch the first episode On Demand. A total surprise! I am now a faithful watcher and plan on reading the series by the same name by Melissa De La Cruz! 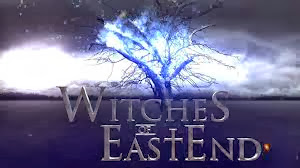 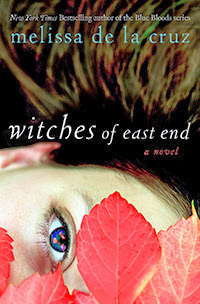 What spooky/paranormal shows are you watching this Fall season?

Posted by Claudia Lefeve at 2:54 PM 2 comments
Email ThisBlogThis!Share to TwitterShare to FacebookShare to Pinterest

It's been almost a week since the hubby and I attended the Haute Cuisine event for Fall for the Book! I didn't have much time to do an update, as several hours later we boarded a plane to Tucson for my sister's wedding!

Here are some highlights from the event: 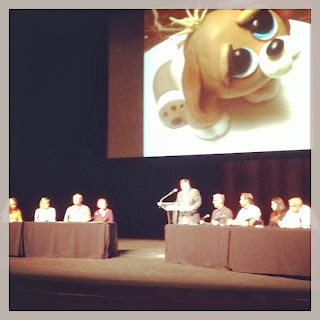 We began the event with a panel discussion with all the chefs/authors. And the puppy in the photo? That was a picture of a cake! There was a slideshow showcasing our books and culinary creations. 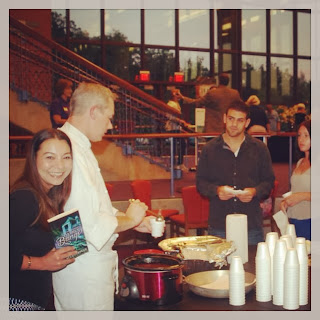 After the panel everyone was assigned a table where we promoted out books and food. Dave cooked up a mean gumbo (the hit of the event) in honor of Darkly Beings. 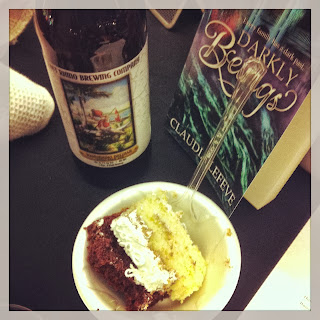 Throughout the event we did some bartering with some of the other participants.
Gumbo for beer and cake!

It was a great time and there were so many great folks that came out for this event. Thanks to George Mason University and the Fall for the Book organizers for this fabulous experience.