Three posts in three days! Must be a record for me... I guess that just means I actually have stuff to post about. So without further adieu:

I am ten pages away from sending my draft to my beta's, so I'll have a much needed break while they tear it to shreds. After I get their comments back, I'll be sending it to the awesome JL Bryan (yes, THE JL Bryan of Jenny Pox fame), who will be proofing the final draft for typos and all those little gremlins that manage to creep in. I am beyond thrilled to have him working with me on this.

And the lovely Heather, over at Bewitched Bookworms, has just posted an awesome review of PARADOX and is graciously offering a giveaway! One winner will receive the first two ebooks in the Travelers Series and another lucky winner will receive two signed print copies! Thank you Heather and BB for hosting this great giveaway!

And for those who've been waiting, {drumroll please} the PARADIGM cover reveal! Once again, Robin Ludwig Design Inc., has created another fantastic cover. I totally loving the blue/teal color scheme. Thanks Robin! 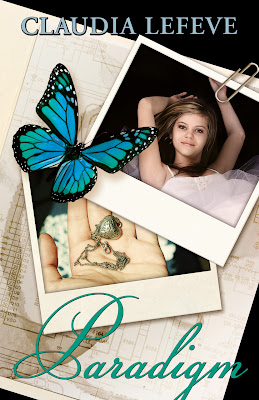 I know... it's a lot of stuff to digest, but at the end of the day, all it means is that I'm well on my way to releasing PARADIGM soon! YAY!

There are so many awesome folks in my corner, most importantly my fans, and I truly feel incredibly lucky. Thank you.

Posted by Claudia Lefeve at 8:15 AM 15 comments
Email ThisBlogThis!Share to TwitterShare to FacebookShare to Pinterest

Today I've set aside the entire day to tighten up book 3 so I can send it out to beta's later tonight. Of course, I get sidetracked and start doing other things (yeah, I procrastinate A LOT). I was messing around on Amazon Author Central and looky what I saw today! SIX new 5 Star reviews on Amazon! There were actually seven new reviews, but the screenshot I took couldn't capture them all.

I rarely look at reviews anymore, as I tend to get distracted (especially if they are unfavorable), but today, I'm glad I did. This gives me the added motivation to get cracking and finish book 3! A HUGE thank you goes out to everyone who reviewed PARALLEL and PARADOX! It means so much that you not only enjoyed the series, but took the time to write a review. 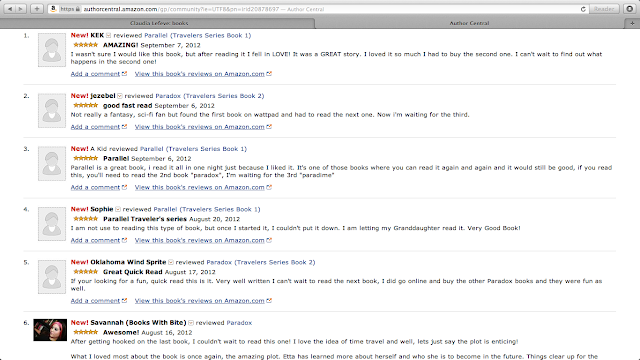 And tomorrow, I'll be announcing an awesome giveaway...so stay tuned!
Posted by Claudia Lefeve at 10:21 AM 2 comments
Email ThisBlogThis!Share to TwitterShare to FacebookShare to Pinterest

I thought I was late with my ROW80 update, but it turns out, the official last check-in day is tomorrow. I'm actually on time for once!

Since this is my last post, I decided to do a run through of all that I've accomplished these last 80 days:

1. I didn't get PARADIGM (book 3) published, as I'd hoped, but it IS ready to go out to beta's in the next couple of days...so I only missed this goal by a day.

2. I turned in two short stories (one Christmas, one Halloween) or two separate anthologies and I'm pleased that they were accepted (more details on that later).

3. Did some awesome interviews of epic proportions (I got Jack'd by Jack Wallen, was featured in The Indelible's newsletter, and even got a guest spot on the Wattpad Insider!)

Since I started participating in ROW80, I've always kept my goals simple: write everyday. With a couple of exceptions, I've pretty much kept that goal and I can't ask for anything more than that, right? I think next round (starting Oct 1) will include getting things turned in ON TIME!

I hope everyone had a great round for those that participated and see ya'll in October!!

For those wondering about the status of PARADIGM: I've already submitted image files to my cover artist, my new editor has been contacted, and my beta's should get their copy this week!

I also have some cool news about the direction the Travelers Series is going and I'll be sharing that as soon as PARADIGM is released!! (And no, it's not being optioned for film, or anything amazing like that).

Posted by Claudia Lefeve at 6:56 PM 2 comments
Email ThisBlogThis!Share to TwitterShare to FacebookShare to Pinterest

I just sent the final blurb to my fabulous cover artist so she can get started on the full cover design. Thought I'd go ahead and share it with ya'll!

Take hold of your destiny...

Undeterred by the shift in the timeline, it is up to Cooper Everett and his friends to convince Etta that she is still destined to become their leader, fighting against their post-apocolyptic future.

Will meeting ghosts of her past convince Etta that she's part of a grander destiny? Or will her past, present, and future worlds collide?

Hope you enjoy this little teaser and I hope that I'll a have a cover reveal sometime next week!

Posted by Claudia Lefeve at 12:47 PM 2 comments
Email ThisBlogThis!Share to TwitterShare to FacebookShare to Pinterest

Leave it to me to get behind on a lot of things this week. I forgot my post over at Spellbound Scribes on Tuesday, but I finally managed to get it up there (if you want to know about plotting, check out my post)!

Yesterday, I forgot my Wednesday ROW80 update (as I scrambled to get my Spellbound Scribes post up a day late). So here I am. Better late than never, right?

And lastly, I'm a bit behind on getting PARADIGM out to my beta's. I am feverishly trying to get my final draft up to par before sending it out. I had hoped to send it right after I got back on Monday, but needless to say, I didn't get a whole lot of editing done. But can you blame me? I was doing this all weekend: 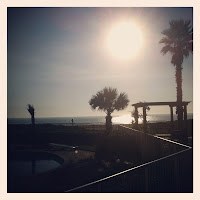 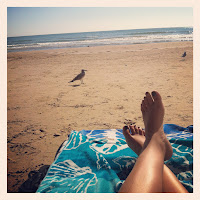 The view from our condo at South Padre Saturday morning and there's me enjoying the view on the beach. It always amazes me how beautiful South Texas can be. 12 years is a long time to be away from home!

And trust me, I would have carted my laptop to that beautiful sandy beach if I wasn't afraid it'd overheat under the Texas sun, umbrella or not!

As for book 3 updates, I am now half-way done with final edits on PARADIGM and I WILL get it out to my beta's soon. I also contacted my fabulous book cover designer to start working on the cover! SOO excited!

Posted by Claudia Lefeve at 1:33 PM 1 comments
Email ThisBlogThis!Share to TwitterShare to FacebookShare to Pinterest

What's in my bag?

Finally started the second round of edits! Just a few more days now before I email PARADIGM to my faithful beta's! And just in time, as by this time tomorrow, I'll be on a flight to Texas!! YAY! The hubby and I will be going home to visit my folks, not to mention spending a few fun filled days on South Padre Island. So you can bet, I'll be reading on the beach and of course, doing some editing in-between waves.

So what does a writer take on a 3 hour (plus an extra 1 hour connecting) flight to Texas? I'm always fascinated by what folks lug in their carry-on bags. If you've ever scoped out any fashion blogs (What's in my bag?), you'll know what I'm talking about. Maybe I'm just interested in human nature (are we all creatures of habit?) or perhaps I'm just a classic voyeur, taking a small glimpse into the lives of complete strangers (in my case, I'm completely turned on by acessories).

In any event, here's what I'll be lugging with me on my flight (in case you're curious like me): 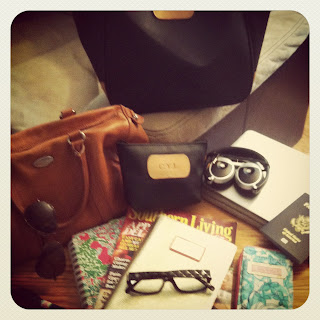 1. Jon Hart Tote (this carries EVERYTHING!)
2. Furla handbag (when traveling, I like to take one purse that coordinates with any outfit)
3. Ray Ban aviator sunglasses
4. Jon Hart Chico cosmetic bag
5. Lilly Pulitzer agenda, recent issue of Southern Living, and my Kindle (Lilly Pulitzer cover), and my Chanel glasses (so I can read everything in that pile)
6. Lilly Pulitzer wallet
7. Bose headset (so I can watch episodes of Gossip Girls Season 5 on my iPhone)...not noise canceling, but they still rock!
8. Mac Air (yes, I plan on doing some writing/editing in-flight and while having fun in the sun)
9. Passport (my folks not only live near the island, but right on the border, so I never know if I'll need it)

Okay, I know this sounds like a blatant advertisement for goods (did I mention how much I love Lilly?), but I added the brands in case anyone's interested!!

On that note, I'm off amigos! I have one class to teach today, finish packing, and getting some more editing done before tomorrow! Happy reading and writing folks! (I'll try to post pics!)

Posted by Claudia Lefeve at 10:25 AM 1 comments
Email ThisBlogThis!Share to TwitterShare to FacebookShare to Pinterest

It's Memorial Day weekend and it's raining. I probably wouldn't have noticed, as I've been writing non-stop the last couple of days, but then it was time to let the pugs out and they refused to... ah, it's raining!

Right now I'm having a love-hate relationship with book 3, but more love than hate. I really, really, want to make this one shine and it's taking more time than previously estimated. NO, not that much more time, but I definitely have to put in more hours to get it done. Damn these extra scenes I keep adding! I already finished my first round of edits and I'm sure I can expect to add just a few more things by my second run, before sending it off to beta's and my editor.

And I want to thank all my readers that have been hounding me for book 3! It means so much that you've taken the time to email or contact me on facebook about PARADIGM. I finally have someone of a release date (mid-late Sept)!! My apologies for getting this out a little later than expected, but I don't want to disappoint! So, thanks again for your encouraging support (and nudges).

That's pretty much it in a nutshell. Writing away, hoping to get somewhat of a finalized draft to my beta's before I go on vacation on Thursday. The hubby and I haven't been anywhere all year, so it'll be a welcomed treat for us.

Now I'll go back to writing and watching Pretty Little Liars on Netflix (my BFF just got me hooked, which is only fair since I got her hooked on Gossip Girl).