Paper or Tech? Let's get organized!

It's no secret I love technology. I'm practically glued to my iPhone and travel with my Mac 11' Air everywhere (it fits in my purse, yo!), and I make a decent living off ebooks. So, last year, I decided I would chunk my paper planner/agenda and use my nifty calendar features on my phone/laptop to organize everything: from bills, important dates, to word counts.

And after almost a year, I decided I hate it. I'm still a paper kind of gal. This week alone I managed to triple book myself. The hubby and I made plans to go to Texas to visit the family (and spend time on the beach) in September and after I booked our flights and reserved our condo, I realized that I had plans to serve on a writing panel AND had RSVP's for a wedding that same weekend. I won't even go into all the deadlines I have for my writing.

Thank goodness I had just ordered a new planner. It would have come in handy a few days before I made these plans, but nonetheless, I am happy to be able to write down things again. 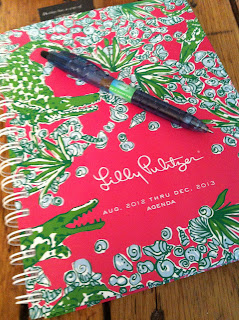 I'm a HUGE Lilly Pulitzer fan, so I ordered the large agenda. Yes, it's girly, but hey, I AM a girl! I even have the Lilly Pulitzer cover for my Kindle (you can see my review here under Claudia32), among other things. Anyways, I now have plenty of space to jot down everything for the next year and a half. 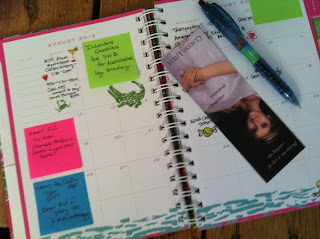 Personally, I love a full month view so I can see everything all at once. This planner has two monthly calendars for each month, so I can reserve one for personal and one for writing. Yes, those are stickers. It also comes with a sheet of nifty stickers, which I LOVE. And notice my bookmark? As you can tell, I already have sticky notes on it for reminders! 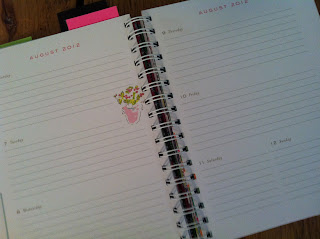 I'll probably use the daily calendar to keep track of my word counts. I currently use an app on my iPhone, but I don't really like it.

I hope I'll get back to getting organized, now that I don't have to rely on tech calendars I rarely look at. Now, I gotta see about getting rid of some of those sticky notes and check them off my list!
Posted by Claudia Lefeve at 1:15 PM 4 comments
Email ThisBlogThis!Share to TwitterShare to FacebookShare to Pinterest

Did ya'll miss me? Yeah, I know it's been over a week since my last post, but this is the first chance I've had to catch up on anything, much less post anything!

It's ROW80 update time and I have absolutely nothing to contribute today. I spent the last week touring our nation's capital (at the capitol) with some of America's finest youth (I was on staff at a national conference). So while I didn't get the chance to write ANYTHING, I did pick up some great one-liners and all the "in" things kids are into these days... I think I'll just chalk this up to a week of research.

I will be back on track tomorrow and I hope to have something newsworthy by Wednesday!
Posted by Claudia Lefeve at 8:17 PM 6 comments
Email ThisBlogThis!Share to TwitterShare to FacebookShare to Pinterest

I've been dreading this post. I've put it off for weeks, days, and now it's finally time to sit down, get over it, and write the damn post.

I had really hoped that I would meet my dealing and have PARADIGM out to my beta readers this week. Things just got a little out of hand and I'm way behind. There were several scenes that just have to be rewritten and it's going to take me a little longer than planned. I want to make sure I do book 3 justice and certainly don't want to publish a mediocre story simply because to meet my deadline. Now, I don't want to jinx things again by putting out a new date, but..... I should have something for my beta's sometime next month.

I want to thank everyone who has emailed and left comments on my Facebook page letting me know how much you've enjoyed the Travelers series so far! It means the world to hear from you and I hope you're not too disappointed that I have to push book 3 a few more weeks.

Now, here's a little of what I've been up to these last couple of weeks:

Yesterday, the fabulous folks over at Wattpad featured PARALLEL and asked me to do a guest post on the Influence of Pop-Culture on their blog.

I also did a quick Q&A yesterday over at Write by the Rails, a local writer's group that I'm a proud member of.

Today, I got to visit Ty Johnston over at his blog, where I chat a little about PARADIGM, Buffy, and snack foods.

I've got two new short stories in the works! The first is for this year's Coffin Hop! I am so excited to get to submit a short for this awesome event. I'm about half-way done and I should have it finished by the end of the week. Now, even if my story isn't selected, I'll still be promoting the hell out of it and will have some fabulous prizes in store (3 months to go ya'll)!!

The second story will be for a Christmas themed anthology, put together by the fabulous Red Tash. This story will be part of the Travelers Series universe! I hope to have this short finished by the end of the month.

And in case you missed the last couple of posts, unDEAD DIXIE DEBS is now available (ebook) on Amazon and Barnes & Noble. The print version finally got done earlier this week and is now in print!

I hope everyone is enjoying the summer and staying cool!
Posted by Claudia Lefeve at 6:03 PM 15 comments
Email ThisBlogThis!Share to TwitterShare to FacebookShare to Pinterest

Or shall I say, Indiependence? In any event, I hope everyone had a great Fourth of July celebration! It was the perfect weather here in Northern Virginia to do nothing but stay in the pool all day and eat burnt hotdogs (just the way I like'em) and hamburgers.

Here's how we celebrated at Casa Lefeve this past Wednesday: 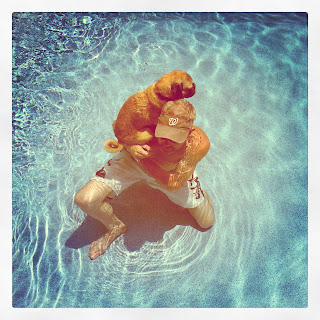 Yes, our fearless pug Gus wasn't to thrilled to take a dip in the pool. 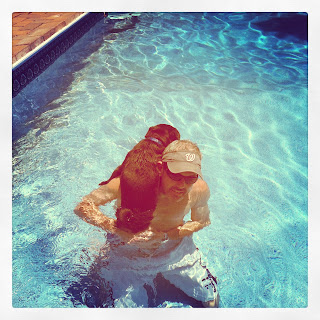 Neither was Guapo...but they had to stay cool! 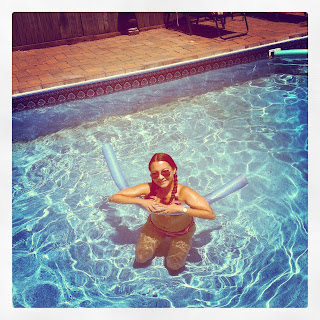 This was basically what I did the entire day. My arms were actually sore the next day from using the floaties!

I did manage to read a bit and finally got a chance to read Alice in Deadland by Mainak Dhar. I couldn't have chosen a better book to read on Independence Day, as freedom was a central theme in the book...yeah, yeah, it had zombies too. I'm looking forward to reading Through the Killing Glass! 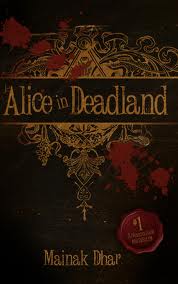 On Thursday, I was fortunate enough to meet up with one of my favorite indie authors, Martha Bourke, for dinner.  We had so much fun catching up on book related stuff and I'm grateful she (and her hubby) took time out of their 12 hour road trip to stop by to hang out!

Then on Friday, unDEAD DIXIE DEBS went live on Amazon! Yay! So for those of you that love shorts, along with some vamps, zombies, and overall southern hospitality, check it out! It should be up on Barnes and Noble and iTunes soon. 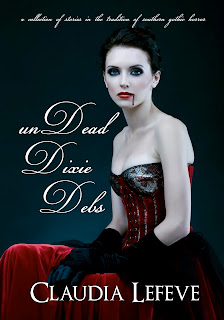 And finally, my Goodreads Giveaway (a signed copy of PARALLEL) ended and I have two winners (out of 1100 entries)! Congrats go out to Idia and Felicia!! If you haven't picked it up yet, it's still FREE on Amazon, iTunes, and Wattpad...everyone's a winner!

Posted by Claudia Lefeve at 9:59 AM 0 comments
Email ThisBlogThis!Share to TwitterShare to FacebookShare to Pinterest

I'm still not sure how it got to be July already, but here we are...five months away 'til Christmas! I've got so much going on, I really wish it were December!

1. I hope to have my anthology, unDead Dixie Debs released by the end of the week! YAY!!
2. Wattpad will be doing a feature on PARALLEL on July 10th, along with a guest post from me!
3. On July 11th, my awesome interview with the even more awesome Ty Johnston will be up on his site. 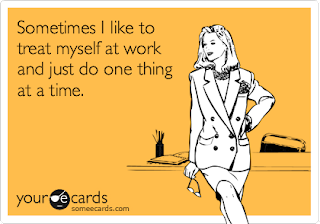 4. I'm also working on two shorts stories to submit to two different anthologies. One is for a Christmas collection that will feature a short from the Travelers universe and the other is for an upcoming Halloween one (keep your fingers crossed that I get accepted to both)! The deadlines to submit are within the next few weeks...

And in the middle of all this, I'll be working a week long conference in the middle of July. I'll have limited access to just about everything! Let's just hope I can get these things done... I am however, grateful that we didn't lose power like the rest of Northern Virginia during Friday's storm (folks are STILL without power) or I'd be up a creek!

Today, check out my author interview over at Randomize ME and my post on my secondary character at Spellbound Scribes!


Posted by Claudia Lefeve at 9:50 AM 0 comments
Email ThisBlogThis!Share to TwitterShare to FacebookShare to Pinterest

I love getting books signed. I've built quite a collection these past couple years, hounding authors for their John Hancock. Whether the author knows me personally or not, every signed book has a story... 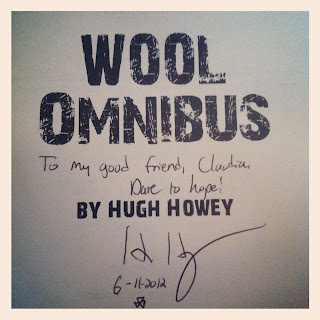 The most recent and most coveted in my collection. Hugh Howey was nice enough to take my multiple book order personally via email vs. online form. I also had the prequel, The First Shift signed as well. 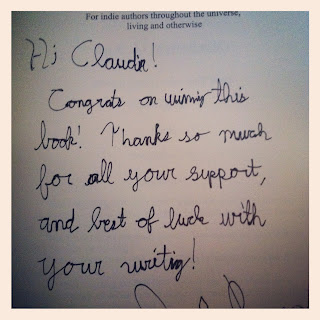 J.L. Bryan hosted a blog tour for his book The Haunted Ebook last year and I was the lucky recipient of a signed copy! A year later and we're now good writing buds. 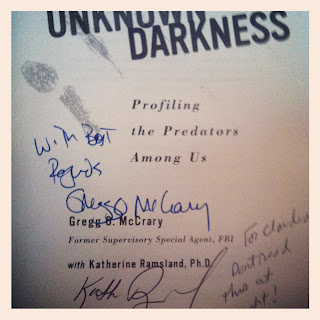 Back when I was finishing up grad school, I took a week vacation in order to take Gregg McCrary's week long course. The required text was one he co-wrote with Katherine Ramsland. Years later, I found myself in Gettysburg one Halloween where Ramsland was doing a book signing for one of her ghost books. Needless to say, she was surprised to find me there with The Unknown Darkness, ready for her to sign. 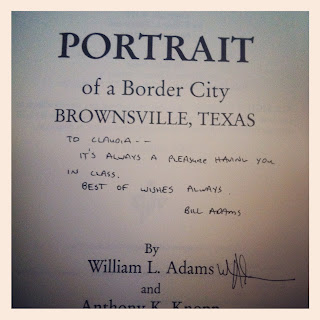 Another favorite of mine, Portrait was written by two of my favorite college professors. For some reason, I never got it signed by Dr. Knopp. Anytime I feel homesick, I read this collection of stories.

I have quite a few more in my collection, but these are by far my favorites. What signed books do you covet?

{P.S. If you'd like an autographed copy of one of my books just email me or go to the books section on my site. And signed bookmarks are always FREE!}